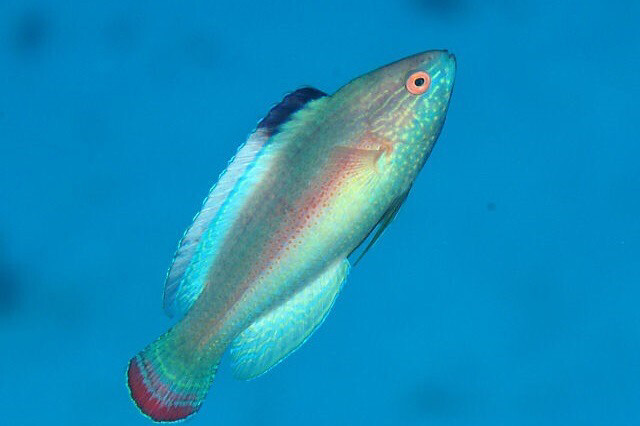 Habitat: Natural geographic location:    The Red-margined Fairy Wrasse or Pink-margined Fairy Wrasse is found in the Cocos-Keeling Islands (Indian Ocean) and Western Pacific; Southern Japan (including Izu Islands), Taiwan, Philippines, Indonesia, Palau, Vanuatu, Fiji & Tonga Islands where it often inhabits outer reef slopes and drop-offs, and deep coastal areas. It is absent from the Papua New Guinea region. A female was collected as a holotype from Sesoko Island of the Ryukyu Islands in 1975, and Cirrhilabrus rubrimarginatus was described by Randall in 1992.
This species overlaps with the related C. pylei in some areas but C. rubrimarginatus has not been recorded from Papua New Guinea or the Solomon Islands. Specimens from deep Palau (66-90 meters depth) may prove to be a distinct species in the future. Males from at least Fiji and Vanuatu have a longer, outstanding pink band on posterior part of the back.

Status:   These fish are not endangered.

Description:
The Red-margined Fairy Wrasses or Pink-margined Fairy Wrasses are sexually dimorphic. The body of the male is overall grayish to pinkish with numerous fine dots on the sides. The abdomen is whitish and the head a greenish yellow. The dorsal and caudal fins are yellowish with a broad red band distally; the pectoral fins are translucent; and the pelvic fins are very long and yellowish black.

The males will change colors while displaying; the body turn whitish, the margins of fins become bright pink, pectoral fins change from translucent to orangish, dorsal fin become whitish except anterior part (deep purple-red), and also caudal and pelvic fins turn dark (males from at least South Pacific and Yakushima Island (north of the Ryukyu Islands). Another mode of color-change is often recognized in males from other areas including Okinawa; dorsal and anal fins will become snowy white except the anterior part of dorsal fin that turns jet black, but the body will turn deeper coloration.
The pictures on the right show the coloration changes. This 12 cm male from Vanuatu (same specimen top to bottom) is changing from its usual color (top), to excited coloration (center), and then to display coloration (bottom).
Females are an overall pink with a yellow head, the abdomen is whitish, and the fins are yellowish. The dorsal and caudal fins have a reddish margin.
Juveniles are a deeper pink with a yellow back and mouth. They also have a black spot surrounded by white on the upper side of the caudal peduncle.

Maintenance difficulty and compatibility:   No special care is needed to keep the Red-margined Fairy Wrasse in a captive environment, and it will accept almost any food. It is not aggressive or territorial but a large male may fight with new comers of the tank or dart quickly into a crevice when an aggressive fish approaches, so aquarists need to provide many crevices. It may frighten and jump out, so the aquarium should be firmly covered on the top. It will do well kept together with larger but non-aggressive species.
The Red-margined Fairy Wrasse would be a good choice for any reef-type aquarium, doing well in coral-rich tank with sessile inverts and/ or a fish community tank, but it may harm some small species of shrimps. Select tank mates that are not very aggressive. Larger and rather territorial angelfishes like the members of Centropyge, Apolemichthys, Genicanthus, Chaetodontoplus and Pygoplites will be acceptable. Smaller cardinalfishes, gobies, tilefishes, butterflyfishes, fairy basslets, other fairies and flasher wrasses, etc. can be kept together.
I have kept more than ten specimens of this species from a 7 cm long female to fully-grown males (12cm) in a fish only tank with some other several fairy and flasher wrasses without any problem.

Foods:   Meaty foods, dried flakes, and dried shrimps are favorable foods and it will also feed on tablets. If kept with too large or aggressive fish species it may not take any food, except perhaps in the corner or behind rocks.

Maintenance:    Like all wrasses, the Red-margined Fairy Wrasse is very energetic so needs frequent feedings. Feed at least twice a day. As it does not harm any polyp of stony or soft corals, it is an excellent tank mate for reef aquariums. Make sure there is open space for free swimming and many crevices to hide in.
Frequent water changes are not needed. When doing water changes, it will tolerate a sudden small change but the water temperature should be kept the same.

Aquarium Parameters:
Minimum Tank Length/Size:
The tank size of at least 90x40x40 cm should be provided for large males.
Light: Recommended light levels
It can be kept under strong lights or in a dim-light tank..
Temperature:
Keep the water temperature at around 75 - 79° F (24 - 26° C). This species lives in tropical to subtropical areas, but higher than 84° F (29° C) or below 68° F (20° C) would not be good.
Water Movement: Weak, Moderate, Strong
Water movement is not a significant condition, but slow-moving water is recommended as it needs a slow flow in the tank to feed.
Water Region: Top, Middle, Bottom
It usually is actively swimming near the bottom and it will venture to the surface for foods.

Sex: Sexual differences:   The Redmargined Fairy Wrasses are sexually dimorphic. While the males body is an overall grayish to pinkish coloration, the female has an overall pink body. See the description section above for more detailed information.

Breeding/Reproduction:   It has not yet been aquacultured.

Availability:  This species is fairly common at retailers. Specimens often available range 7 - 12 cm long, but tiny juveniles are also be available on rare occasions. It is commonly sold at prices ranging between US $30.00 - $40.00.