Save 25% off all LiveStock including fish, inverts and CORALS!

5% off Everything else in store (excluding MAP products EI: Ecotech)

‘BLONDEFRIDAY’ for livestock, ‘NEPTUNESALE’ for Neptune Systems products and ‘5%OFF’ for all other products 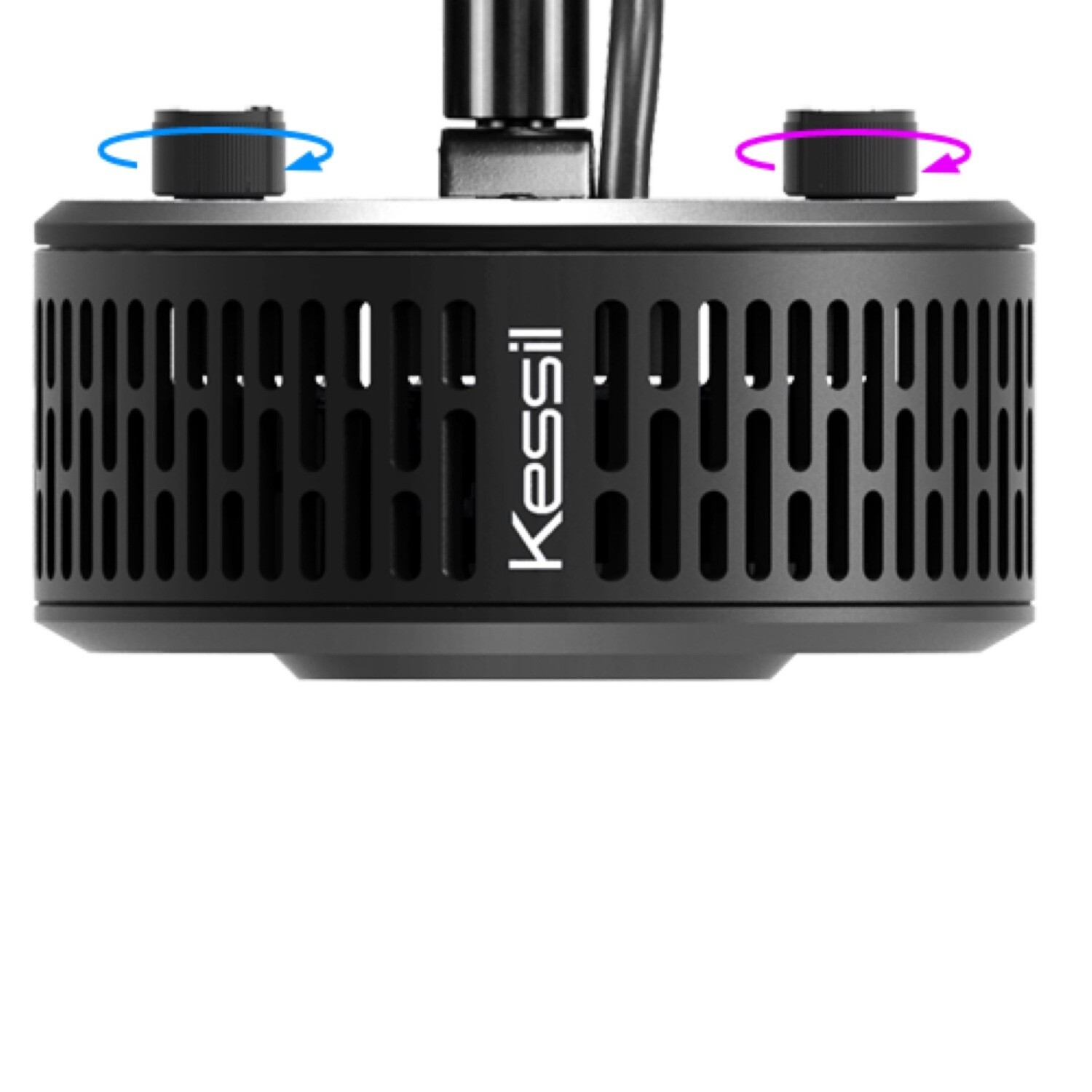 SKU 4CNHO6LAHWJXDZKN5KPSAPX7
C$599.99
In stock
1
Product Details
Kessil Announces the New A360X LED Aquarium Light & Spectral Controller X The Kessil A360X is an upgraded, redesigned successor of the popular A360WE LED aquarium light, not only improving the solid design of the original, but also adding more groundbreaking features to make it the best LED light in the market for reef and planted aquariums. The A360X leverages the technology of Kessil's award-winning pendant lights and makes it even better by achieving a higher Photon Volume Density (PVD), adding more individual colors, featuring a smarter communication method, improving transition points, and having light shaping capability. Like its predecessor, the A360X is a 90 watts pendant fixture with Tuna Blue model for saltwater and Tuna Sun model for freshwater aquariums. Thanks to the redesigned, first-class sunflower heat sink and high efficiency vortex fan, the A360X has 25% more light output with 30% less in volume size, equivalent to almost 80% higher PVD than the A360. The new design enables streamlined vortex airflow to dissipate heat more efficiently, and prevent accumulation of dust, which means longevity and reliability. This state-of-the-art fixture also features the latest and most efficient patented Dense Matrix LED technology from Kessil’s parent company DiCon Fiberoptics, Inc., while adding more individual color control, so users can have unlimited color combinations for aesthetics while maintaining the performance of the core spectrum. The A360X also features a smart communication method called K-Link, which keeps the plug & play feature of 0-10V while allowing more control to users. With the new Spectral Controller X or the future WiFi Dongle, users can easily network multiple A360X and set individual groups to run their own unique programs, allowing unlimited programming possibilities. The A360X can also be used with optical accessories to shape light, allowing users to modify the look of the aquarium to their liking. The A360X can be controlled and programmed using the brand new Spectral Controller X and a WiFi dongle that will be launched shortly. These control accessories will take full advantage of the A360X’s features, whether it is full color control, custom lighting schedules, or moonlight mode. For mounting, it is compatible with the existing sleek-looking Mounting Arm and the A-Series Gooseneck. Superior Illumination Coverage The newly designed optics along with the latest generation Dense Matrix LED array provide a broader delivery of light and eliminate shading. Spectrum The well-known Tuna Blue spectrum has been proven by its users to promote coral growth and enhance coloration. With Kessil Logic™, it ensures consistent power output and coral growth across the tunable spectrum. Shimmer The Kessil shimmer effect gives your tank a beautiful, natural, sunlit look comparable to the shimmer of a Metal Halide fixture. It is like replicating your own piece of the ocean. Penetration Patented Dense Matrix LED technology concentrates multiple LED chips into a single array, creating a powerful and penetrating light source with wide coverage. The maximum penetration can reach 24" to 30" beyond the water's surface for most reefs. Penetration can be further enhanced by using the narrow reflector (optional accessory). Color Mixing Different wavelengths are seamlessly blended within a single LED array, emitting uniform color across the coverage range.
Save this product for later

WOW! The owner, George is super knowledgable, friendly, and helpful. The store is stocked with hard to find high quality dry goods for every reef hobbyist. Very competitive prices, and definitely the same or cheaper than what you would find online. Super healthy and beautiful corals and fish. Definitely will be one of my favourite to-go to stores in Winnipeg! Highly recommend!

Just received my package from @concrete_blonde_corals !! Thank you for your amazing customer service. I can’t wait to try out the PolypLab polyp-booster!